Diametric elbows
Militate acrid ankles
Shuddersome tribulation shoulders
Buried, buried, buried
Incarcerated in ascetic
Never to issue, never to blossom, to bloom, barely dream
“I would go out tonight but I haven’t got a stitch to wear”

Posted by amalgamatedwondersoftheworld on June 14, 2018 in Uncategorized

The cobble stones become fish heads and the boardwalk planks and railway sleepers become bodies and drunks asleep where they fell. The fog muffles the distant clang of a soft metal bell, the rust on the hammer absorbing the force of the blow. Sporadic fog horns, each from a different direction three sixty degrees and getting gradually closer yet further away. Some old gulls squabble, blind and deranged, not aware of the time of the day or the depth of the night. With the sea breeze comes the breath of the night, over the gentle ripples of the almost stagnant bay, the smell of the sea in all its decrepit splendor. The fragrant and pungent, fresh and decayed, there is salt in the air, there in salt in the wounds of the broken nosed fools. It brings tears to the eyes, as does smoke, and chopping onions, remising, or any consideration of our lives. 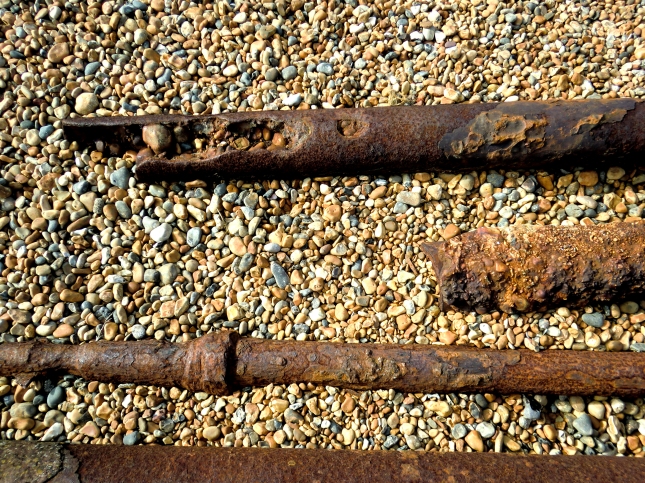 The sea side carnival that once thrived is now survived by just junk ‘n’ drunks. It is best personified by the oddly sweet smelling candy floss vendor who sweats as he turns sticks and pedals his machine. Curls his moustache, rigid with sugar, scratches his crotch, less said the better. The Ferris Wheel – held together by great globules of grease which chokes and spits as the creakiness and strain from sea salt air on Victorian wrought iron buckle and contort, then on days when the wind picks up it picks off shards of egg shell blue paint raised off the surface on layers of rust and decay, tiny fragments fill the air and top ice creams of red eyed infants and scabby kneed kids. Tonight its buckets slowly sway in a symphony of moans either moved by, or moving for effect, the mist that shrouds and envelops the lovers beneath. One pair of lovers, the rest are just lonleys together. Old lovers and young lonleys. Old and away from their lives for one brief fleeting moment of cherished contentment, once in a millennium of doom and gloom and blame to which tomorrow they must return. The young just desire what the old couple have tonight but through their desperation and circumstance of nights like this they are sealed to the same fate of doom and gloom and blame for a million millenniums every day of the week for the rest of their lonely lives. Outside the sad silent saloon all closed and bolted some hours ago, accordion wheeze in synch with the breathing of a fat snoring lump as he sleeps up right – girth corked in the top of a barrel, a crooked mound – till the guttering he leans on bends from his weight and gives way, he falls fast to the wall and slides like a damp rag down the brick, jowls fill the spaces between like viscous grouting, he slides in slow motion, so amazingly slow considering his abundant size. Accordion burst and disgruntled gruff murmurs as he resettles in puddles and cigarette butts.

The top of the town, the bay head. Docks on a pier that leads to a bar with some rooms. This was the hub, this was the heart pumping blood to the town below… This is now the place where children once came to play during school holidays. Summers sun bursting in their memory still. This is now the place where sad clichés linger, fester, propagate and thrive like virus. They cling to the tongue and stuttered infinitely in fear of being spent. “The sea side town they forgot to bomb”, indeed.

Faded posters invite to long since car-parked ballrooms and bingo-halled theatres with names of entertainers whom have been consumed, digested and regurgitated by worms in the intervening years and similarly afore by whiskey, gin and chorus girls. From flappers to slappers, once the play ground of the social elite, a resort to rival the Riviera, then after the obliteration of class and humanity circa late ’40’s, all were welcomed. This place then favoured children and they came in their abundance for years, then came the swingers, the socialist conventions and anti tax rallies, illegal ravers, the homosexuals and finally the pensioners. Nobody comes these days, nobody leaves either, they just stack up and up all the while crashing down and out. This ol’ town still has its abundance of one armed bandits, pirate rides and big dippers. The log flumes and tetanus jabs, dodgems and compulsory scabs, waltzers, wineos and chip vans, this place’s a fair ol’ ground, pale, sickly and puce, from pill box grey sky to pill box abuse, purgatory, with a touch of dungeon, and purpose without hope, the dregs. “A pint an’ two ez please”.

A prosopopoeia hurdy gurdy plays a Circus Screamer through the démodé tannoy. The wires vibrate and the suspended coloured bulbs, all faded and rain filled, rattle and sway in the eerie gloom, their light wains as the music swells, soaking each other’s power, exchanging light for sound and so on and so forth, like the exhausted trying to resuscitate the fatigued and collapsed, open mouth and breathless, gasping and drooling into vacuous chasms of belch and halitosis and the rest. It is still in the am…

The squabbling blind gulls bite and pinch at the air occasionally landing blows on already bloodied feathers over what they think is food but really just old rope that fish guts had saturated the tide before. They will do this till the next tide and again when it recedes. The moments in-between they perch peacefully and eat candy floss off the frayed spokes on the slow moving Ferris Wheel, soothed by its unhinged motion and subtle hummed song.

Posted by amalgamatedwondersoftheworld on November 9, 2012 in Something Else...